Tired of the same old vacation activities like burning on the beach or waiting in line for a coaster? Florida offers so much more than what’s well known to travelers. There are some Florida attractions that are just a bit off the beaten path, but still a cut above the rest. Now, with literally thousands of candidates for this article in Florida, making our list was not easy. We based our selections on customer reviews, location, and offerings. We highly encourage you to take a chance on any of these award-winning attractions on your next visit to the Sunshine State.

In their own words: Visit the World Famous Spongeorama museum and learn about the rich history of Tarpon Springs, the Sponge Docks, and the Sponge Industry. Find out just what a sponge is and where they come from while relaxing in our air conditioned movie theater. The museum and movie are both FREE attractions and are a perfect introduction to the Tarpon Springs Sponge Docks. After the movie you can enjoy shopping in our sponge and gift shop. Pick up all of those must have unique Florida and Greek gifts and souvenirs. 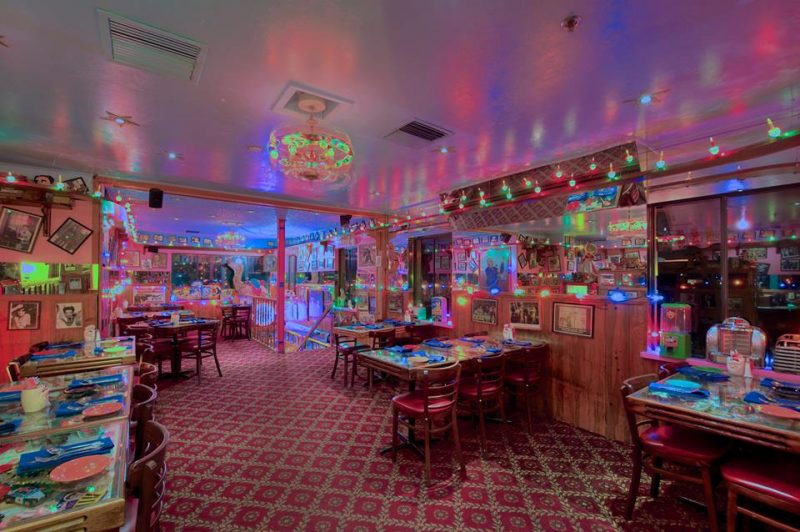 In their own words: The Bubble Room was born in 1979 on its present site on Captiva Island. The world famous restaurant that it is today followed a very modest beginning of just a few tables in the front room of the home of the Farqhuarson family. Today’s famous multi- theme restaurant slowly took shape. Starting with old toys from the 1930’s and 1940’s as its décor in the one room, the collecting began and has continued to the present day.

Many of the original items are still seen here today along with the moving trains now on all three floors added for kids (of all ages). Popular with the many visiting stars of cinema in its early years, photographs soon began to adorn the walls and grew to the profusion of old idols and scenes from the big screen, now seen around you on every available wall space. The front room was decorated for Christmas and the additional theme of “its always Christmas at the Bubble Room” took shape with the introduction of many Father Christmases, the Elf Room and year round Christmas lights. The present owners have followed and developed these original ideas faithfully adding more and more fantastic toys and decor.

In the early days old favorites recorded on private tapes were played as background music. Later came the extensive collection, all composed in the 1920’s,1930’s and 1940’s, that you hear today.

The Bubble Room was one of the first on the Island to introduce the bright and cheerful pastel colors now widely used on the island.

The restaurant still presents several of the distinctive original menu items offered by the Farqhuarsons, including such favorites as Socra cheese, Bubble Bread, Carolina Moons, Tarzan, Eddie Fisherman, and many of the delicious and oversized desserts. 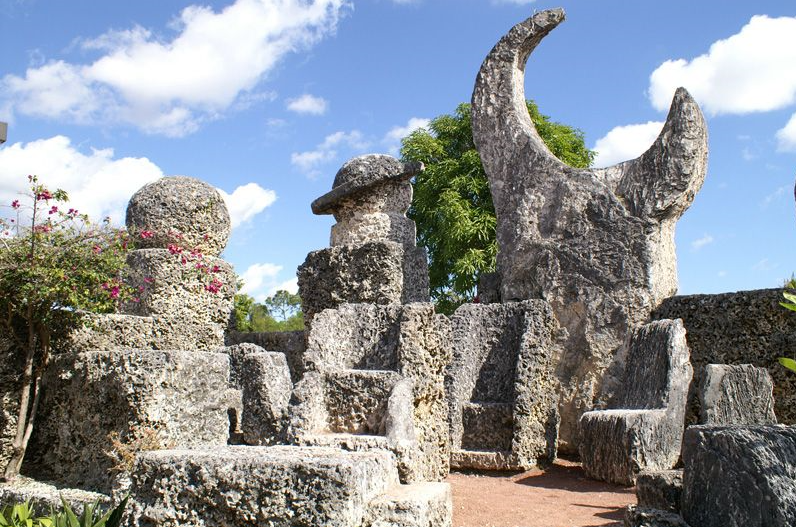 In their own words: We invite you to tour our sculpture garden in stone, built by one man, Edward Leedskalnin. From 1923 to 1951, Ed single-handedly and secretly carved over 1,100 tons of coral rock, and his unknown process has created one of the world’s most mysterious accomplishments. Open every day, the Coral Castle Museum welcomes visitors from around the world to explore this enchanting South Florida destination.

If you had visited Coral Castle in the 1940’s you would have been greeted enthusiastically by a man weighing a mere 100 pounds and standing just over 5 feet tall. He would have asked you for ten cents admission and introduced you to his fantasy world.

As you moved around his sculpture garden in stone, and the significance of each piece was explained, you would have been witness to the great pride Ed Leedskalnin took in his work.

Since it is documented that no one ever witnessed Ed’s labor in building his beloved Coral Castle, some have said he had supernatural powers. Ed would only say that he knew the secrets used to build the ancient pyramids and if he could learn them, you could too.

Today, you can tour the Coral Castle using our audio stands, with narration available in English, Spanish, French or German. We also have knowledgeable guides available to conduct tours. Features of the Coral Castle Museum include a 9-ton gate that moves with just a touch of the finger, a Polaris telescope and functioning rocking chairs – all made entirely of stone.
We wonder what was the inspiration that could cause a man to spend 28 years to carve a Coral Castle from the ground up using nothing but home made tools. An homage to unrequited love? Perhaps to illustrate ancient sciences that defy gravity? Or maybe just sheer, raw human determination?

The Coral Castle is an everlasting mystery to those who explore it.

In their own words: The American Police Hall of Fame & Museum, founded in 1960, is the nation’s first national law enforcement museum and memorial dedicated to officers killed in the line of duty.

The Museum, through interactive displays, simulators and nearly 11,000 artifacts, educates the public about the history and current trends in American law enforcement. Featured at the Museum is a state-of-the-art 24 lane indoor gun range and is open to the public six days a week.

The Memorial lists over 9,000 officers who were killed in the line of duty. Their names are permanently etched on the Memorial’s walls. Names are added to the wall once a year prior to Law Enforcement Memorial Day.

Visit the museum and explore a collection of historic and futuristic police cars. Or you can have your picture taken in a replica electric chair or behind the bars of a realistic prison cell. You can find out how lane enforcement agencies do their forensic investigations and how crime scenes are analyzed.

In their own words: The Dalí Museum celebrates the life and work of Salvador Dalí (1904-1989) and features works from the artist’s entire career. The collection includes over 2,400 works from every moment and in every medium of his artistic activity, including oil paintings, many original drawings, book illustrations, artists’ books, prints, sculpture, photos, manuscripts and an extensive archive of documents. Founded with the works collected by A. Reynolds and Eleanor Morse, the Museum has made significant additions to its collection over the years.

In their own words: Reptile World Serpentarium’s unassuming cinder block and stucco building, which opened in 1972, houses an impressive collection (over 80 species) of snakes from around the world, ranging from the familiar and innocuous to the exotic and deadly. Often listed among the top ten deadliest snakes in the world you will find a splendid 13+ foot King Cobra, a beautiful Black Mamba and all four of Florida’s venomous snakes on display. All told, there are six species of cobra and 11 kinds of rattlesnakes. There are also snakes you may never see elsewhere, like the brilliant pea green East African Green Mamba and its less startling but nonetheless beautiful West African cousin. The snakes are housed in modest glass-fronted enclosures along a darkened corridor. Snakes are the main course, but there are also several species of lizards, a Nile Crocodile, a 14-foot male gator (Pete, and yes, he does know his name) lounging in a shallow, sometimes murky pool with his mate (and sometimes their babies), a passel of iguanas and a pond full of turtles as well as some tortoises.

If all Reptile World Serpentarium had to offer were its snake displays, it might be recommended only to the certified snake fancier, but this is a working venom factory. Though there may be only 50 snakes on public display at any given time, behind the scenes are hundreds of venomous snakes just waiting to be “milked” for their valuable venom. Reptile World Serpentarium ships this precious commodity worldwide for use in medical and herpetological research. The regular “milking” of these dangerous snakes is done in public and makes Reptile WorldSerpentarium more than just another snake house. 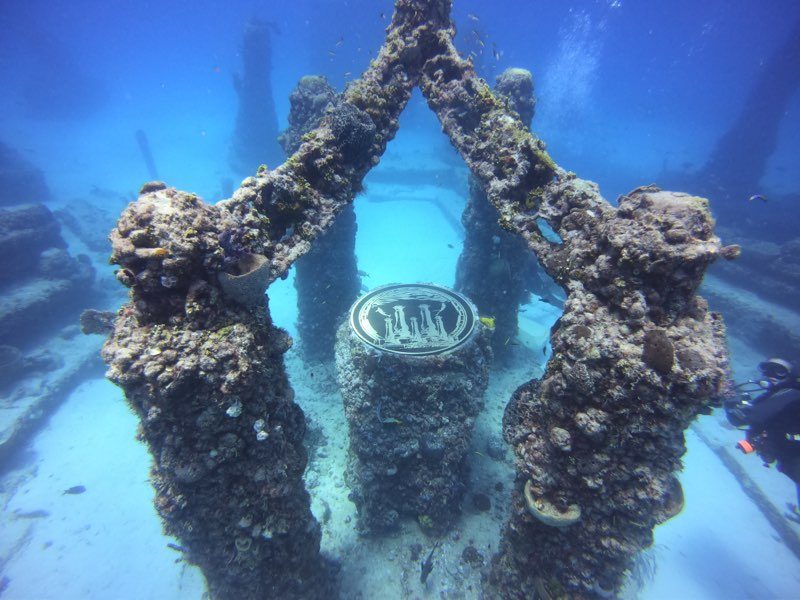 In their own words: Neptune Memorial Reef is an artificial reef located about 3 1/4 miles off Key Biscayne just South of Miami Beach in 40 feet of water. Inspired by the Lost City of Atlantis, it has columns and arches, Lions and gates and when it is complete will cover 16 acres of ocean floor and contain over 5,000 columns. Cremated remains are mixed with cement to create memorial placements attached to the reef in the shape of starfish, seashell, turtle, stingray and other creatures native to the our local reefs.

In their own words: Our unforgettable experience takes visitors on a walking journey into large natural habitats that are home to Gray, Arctic and British Columbian wolves; where they become part of the pack. Participants are inspired by this rare immersive experience that empowers them to interact with the Seacrest Wolf Ambassadors as they learn important scientific facts about this amazing keystone species. Saturday Wolf Encounter Tours last approximately 3 1/2 to 4 hours. A break is taken along the way, and there are logs and benches to sit on. This includes the Small Animal Adventure where you can feed the raccoons, hug a skunk, play with foxes, and meet Pecos the Coyote. All tours are by reservation only and bookings are accepted during the week by calling the wolf preserve for Saturday tours, VIP tours, field trips, group tours, special events and RV and tent camping. 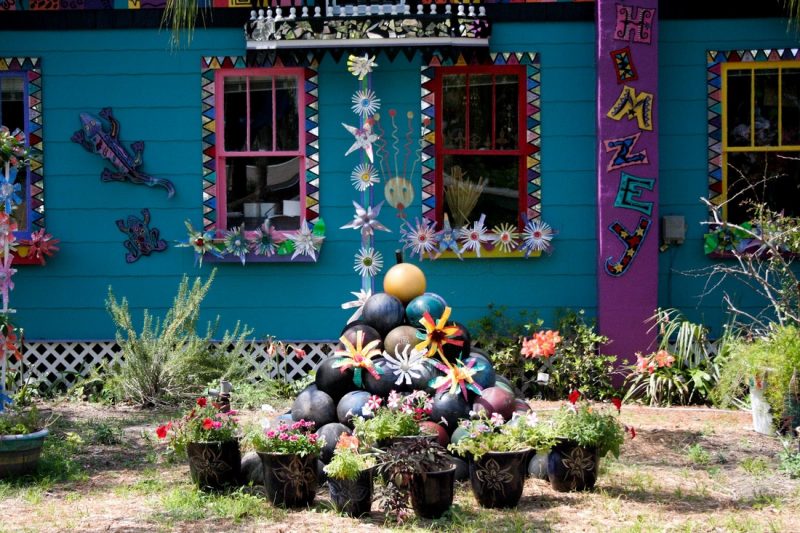 In their own words: WhimzeyLand is and has been a work in progress for over 20 years. It is a local landmark for those who live in the Tampa/St. Petersburg area and who like to seek out unusual places. We have a ton of different materials decorating our house: plexiglas sculptures, paintings, bottle trees, recycled material sculptures, and, of course, bowling balls. We often visit unusual places ourselves, so we started by painting the house really bright. Then, the ball really got rolling when we went to a flea market and came home with tons of free bowling balls. Since then, the house has slowly evolved into WhimzeyLand!

In their own words: Favorite watering hole of such legends as Ernest Hemingway, Truman Capote, Tennessee Williams, Shel Silverstein and Jimmy Buffet, Captain Tony’s Saloon is not just a bar it is a piece of living history. The saloon’s namesake, fishing boat captain gunrunner, gambling casino operator and Mayor of Key West the late Captain Tony, was a larger than life character who was often described as a dropout from a Hemingway novel.

Originally built in 1851 as an icehouse that doubled as a morgue Captain Tony’s Saloon is steeped in history. When you stop in for a cold one, remember you are drinking where legends have been drinking for decades. We’re glad you’re here and we welcome you to stay a while and learn about us!

Browse around the site and please come down and pull up a barstool next time you’re in paradise…we’ll have a cold one waitin’ for you at the bar!

Hi, I'm Paul, I'm a travel writer and I love everything about the salt life. I grew up in the northeast, but we visited family in Florida often ... and I was hooked! I've been writing about the Sunshine State for two decades. I enjoy helping travelers find the best places to stay, to eat, and to play in Florida.

Best Restaurants for a Bloody Mary in Florida 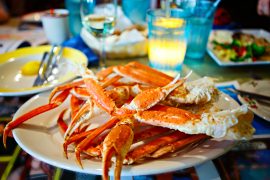 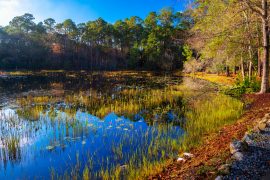