This property is no longer available, but please browse our additional Dunedin vacation rentals 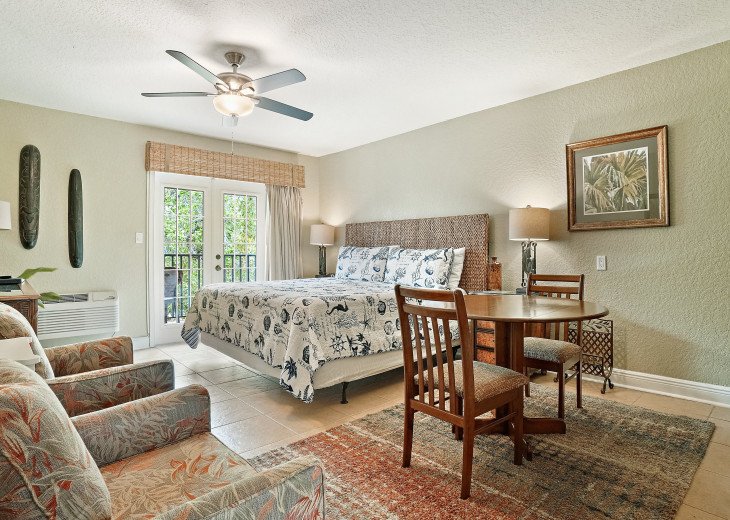 This NEWLY renovated studio condominium has just the right amount of space for two. You'll find a king sized bed, dining table for 2, bathroom with shower and hair dryer, plus a private balcony with garden views. For your convenience, the suite has a kitchenette featuring a two burner stove top, fridge, microwave, sink and coffee maker. The amenities on-site feature on-site coin laundry, heated pools, jacuzzi.

Dunedin is home to several beaches, including Dunedin Causeway, Honeymoon Island, and Caladesi Island State Park, which is consistently rated among the best beaches in the world. Dunedin is one of the few open waterfront communities from Sarasota to Cedar Key where buildings do not completely obscure the view of the Intracoastal Waterway and the Gulf of Mexico beyond; a 1-mile stretch of Edgewater Drive (also known as Alternate US 19) south of downtown offers views of St. Joseph Sound, Clearwater Beach, and Caladesi Island. Downtown Clearwater and Clearwater Beach are a 6-mile drive south on Edgewater.

The downtown business district is notable for its absence of large commercial signage, corporate franchise restaurants or chain retail stores. The Pinellas Trail, a 39-mile-long bicycle and pedestrian trail that traverses all of Pinellas County, bisects downtown Dunedin. A large portion of the trail lies on the former roadbed of the Orange Belt Railway, the first railroad in Pinellas County, which arrived in 1888.

Since 1977, Dunedin is the spring training home of the Toronto Blue Jays, as well as the class-A Dunedin Blue Jays of the Florida State League. Dunedin is one of the smallest communities used by Major League spring training teams, although surrounded by a large metropolitan area. Florida Auto Exchange Stadium is situated next to the Dunedin Public Library a few blocks south of downtown on Douglas Avenue, and is just two blocks east of Edgewater Drive. The stadium was built as a replacement to Grant Field, the Blue Jays' first spring training ball park. The library was founded in 1895 and is the oldest public library in Pinellas County.

Scottish families originally settled Dunedin in the nineteenth century. John W. Marston, one of the earliest settlers, was a skilled carpenter and citrus farmer who provided work for many who came to the area. Two Scotsmen, J.O. Douglas and James Sumerville, named the settlement Dunedin, the original name of Edinburgh, their hometown in Scotland. First settled in 1852, Dunedin has the distinction of being the oldest town south of Cedar Key, Florida. With a dock built to accommodate larger sailing vessels, Dunedin became one of Florida's chief seaport and trading centers and at one time it had the largest fleet of sailing vessels in the state.

Dunedin became incorporated as a town in 1899 in part as a response to numerous complaints about pigs running rampant in the settlement, leading to a still-standing ban on livestock within city limits. By 1913, the town had a population of only 350. It became incorporated as the City of Dunedin in 1925.
Check in: 16:00 - 20:00
Check out until: 10:00
Number of guests included in the base price: 2
Maximum number of guests: 2

Be the first to write a review!
Write a review
Date last modified: January 25th, 2018
Share this property
X Close